Signs That The Enemy Is Affecting Someone’s Life 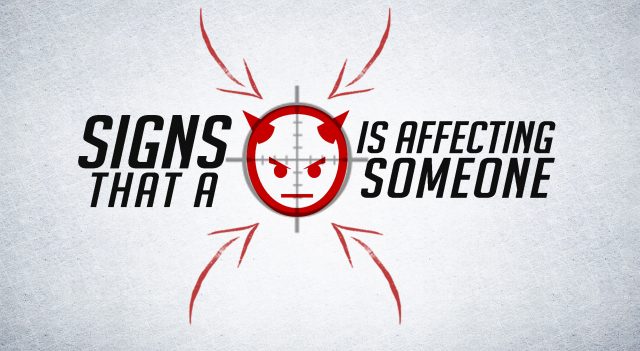 “Finally, my brethren, be strong in the Lord and in the power of His might.  Put on the whole armor of God, that you may be able to stand against the wiles of the devil.  For we do not wrestle against flesh and blood, but against principalities, against powers, against the rulers of the darkness of this age, against spiritual hosts of wickedness in the heavenly places.”   -Eph 6:10-12

Along my spiritual path, a big change in my spiritual life happened when I realized that there are forces acting around me, that were beyond flesh and blood. And they were both acting against me, and reacting to me at times. And as I learned how to do something about it- and this made a huge difference in how I dealt with other people as well as situations.

I realized, if we live our lives ignorant of these forces, we put ourselves at a disadvantage- even to the point of hitting our heads against a wall. We are sometimes thinking: “Why doesn’t this change?!” But the fact is, God has put authority in our hands. Luke 10:19  “Behold, I give you the authority to trample on serpents and scorpions, and over all the power of the enemy, and nothing shall by any means hurt you.”

But the problem is: Authority will not use itself. We have to use it.   But authority can be misused as well! If one of my other kids (child 1) instigates the other (child 2) to do something wrong, but I only focus on the misbehavior of child 2, I am unwise, and the problem will perpetuate itself.

So I put together a list of a few ways that someone can KNOW that there is someone (an enemy) working in a situation. I realized that there are many people who have no clue how to discern the devil in a situation! And because of this, they end up fighting flesh and blood.What I want to do is help you see where the enemy is the REAL source of a problem in a person’s life. This is not an exhaustive list, but it will give you some common clues that you can use, so when they pop up, you can recognize them, and recognize the SOURCE of the problem, so you can accurately deal with it. If you will simply use these clues, or signs, you will go a LONG ways in discerning when you need to switch tactics to deal with an enemy behind the person or situation rather than continuing to struggle needlessly.

Here are the slides that I used with the message-

I know that this message will really give you that ‘aha!’ moment where you will look back and say “Oh… yes, now I see what I was dealing with when this person said or reacted this way…. It all makes sense now!”

If the enemy can remain doing what he does in darkness unnoticed successfully, why should he change his tactics? As it says in Hosea- “My People are destroyed for the lack of knowledge…” Some people and situations will never be free until the enemy can be seen and dealt with. May we all have more and more Holy Spirit clarity in this!

If you would like the mp3 to hear the full message, please order through the link below.