Being a BreakThrough Believer 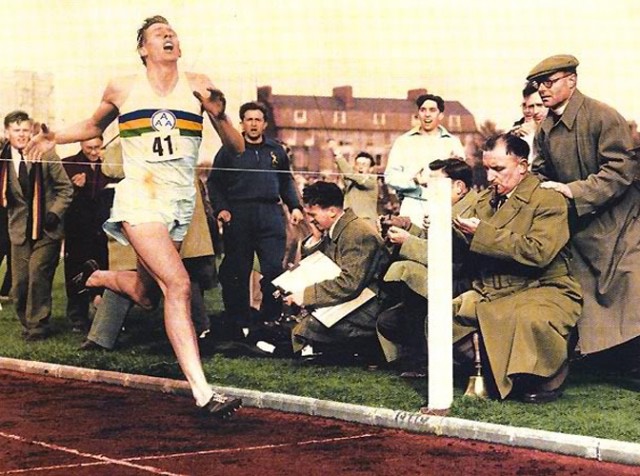 “Doctors and scientists said that breaking the four-minute mile was impossible, that one would die in the attempt. Thus, when I got up from the track after collapsing at the finish line, I figured I was dead.”

Roger Bannister is well known because he was recorded as the first person who ran a mile in under 4 minutes. For thousands of years no one believed it was possible for a human to do this. But Roger had the audacity to believe that it was possible, and it was possible for HIM. If you study his history, he went through times of setbacks and failures like anyone else. However, this goal of achieving the impossible caused him to break this 4 minute barrier on May 6th 1954.

History is formed by those who are BreakThrough Believers, while history is maintained by those who are comfortable in the box of average facts. The Bible says in Ephesians 3:20 that God is able to do exceedingly, abundantly, above all that we ask or think, according to the power that works in us. What a great encouragement- that God has dreams for us that continually would blow our minds- and that we are capable of far more than we currently think we are.

But the crucial point is- do we really believe this? We all have a battle to face, which is the battle of the box of the past. I love studying the examples of church history, and seeing their triumphs and being aware of their pitfalls. However, Hebrews 12 says that these heroes of the faith cheer us on- which implies that we have to pick up baton and take it further than they did. I have learned a sobering truth in my life- that has helped me be a breakthrough believer. Your enemies are more ultimately more valuable for your destiny than the family and friends that surround you. Family and friends will love you for who you are, and will sometimes encourage you to be better… but an enemy will take you to the breaking point. An enemy will never allow you to stay the way you are- unless you become deceived into submission. An enemy will push you beyond your limits so that the best in you must rise in order to conquer.

However, there is another way. It is not an easy way, but it is through internalizing a constant hunger within yourself to press on, experience more, and do better. Until we come to the fullness of the stature of the Son of God, there is always another level of experiencing all that Christ paid for. This hunger is a peculiar treasure- one that must be protected from the poison of disappointment all one’s life.

Recently I preached a message on Being a BreakThrough Believer- and it was a powerful exhortation to reach out beyond the limitations of peer pressures, past failures, and demonic barriers to be the believer that breaks through. In this message I spoke quite a bit about my own personal testimony, how God has trained me in this area. I talked about overcoming rejection, learning not to take the easy way out, and dealing with attacks from those who desire to keep you in the box of comfortability. In terms of Spirit Life training- this message is so important. There is no training, without the constant practice of breaking limitations in the mind, body and spirit.

Don’t let anything hold you back! Once you get the mindset of a BreakThrough Believer- EVERYTHING changes.

4 minute mile, Breaking records, Breakthrough Believer, Character of Champions, Faith that overcomes the world, Fight the good fight of faith, Greater is he that is in you, Overcoming limitations, Roger Bannister